We are very proud to now be home to the UK’s largest gaming arena, Belong London Oxford Street!

Located in central London, our 100-seater arena provides a great space for events and parties, esports training and playing all your favourite titles with your friends.

You can find us through our own entrance next to House of Fraser on Oxford Street. With plenty of travel options available, our arena is easily accessible. To find out more about how you can visit our new arena, please click here.

Staying true to grassroots esports, a range of tournaments and activities will be taking place during the launch of the arena.

Check out our schedule below to find out what we'll be running across our opening week.

We are excited to welcome some fantastic esports teams down to our new arena across our opening week.

You'll be given the chance to meet and greet the teams and maybe even play against them on our brand new PCs!

Our evening tournaments will offer prizes per tournament.

Ready up operators, Siege is back at Belong. Take on teams of 3 in this close action combat and declare yourself the winner!

Think you’ve got what it takes to go head to head against other players? Take your team to victory in this Kick-Off Tournament.

Test your might against other players in this 1V1 tournament.

The King of the Iron Fist Tournament returns to Belong. Take on other players in this 1V1 tournament and dominate the field.

We’re bringing back the acclaimed Wingman mode to Gears 5. Buddy up with a friend and take on this 2V2 gauntlet.

Take part in our 3V3 tournament and prepare yourself for the next coming clash tournament on PC.

Show your skill in our Brawlhalla 1V1 tournament on Xbox.

Get involved with our League of Legends 3V3 tournament.

Get ready to go dark in our 2V2 Call of Duty Modern Warfare Gunfight tournament on PS4.

Book your spot in this 100 man event and fight your way to a victory royale with another 99 people all in one arena.

Take on another 99 players in one arena to claim victory in a series of Battle Royale matches all under one roof.

Play Fortnite, PUBG, CTR and GRID between the 13th and 22nd of December and winners with the highest score at the end will receive prizes!

Winners will be announced at 6pm on Sunday 22nd.

As well as our scheduled tournaments, there will be nightly community events from 6-9pm during the weekdays which you can take part in for £10. Play casually or practice to participate in our esports tournaments.

We look forward to seeing you there! 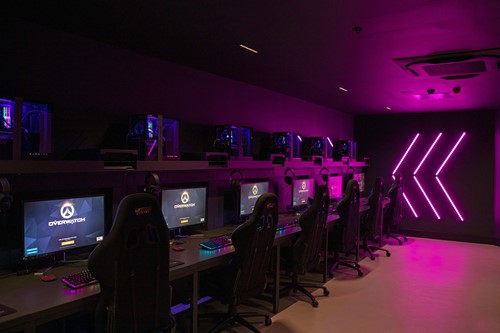 WHERE TO FIND US

Full Terms & Conditions for all activity are hyperlinked under each title.