Belong Gaming Arenas are excited to announce that the winning team from our Summer Season of League of Legends Arena Clash and the top team from Insomnia65's Insomnia Masters tournament will qualify for the first round of Forge of Champions next season, starting this September!

Forge of Champions will give our qualifying teams the opportunity to battle other teams for a position in the UKLC, the premier League of Legends tournament for the UK & Ireland. Any team containing one or more players already participating in the UKLC would not be eligible for the spot but may still participate at Insomnia65, the spot may then go to the next eligible team in the standings – a playoff may be required if there is not a clear option.

This partnership marks the first in a series of opportunities for Belong Gaming Arenas to further the paths of grassroots esports players into pro circuit competitions and encourage players into higher competition.

With our League of Legends Arena Clash in full swing, sign ups for this are currently unavailable, however there is still time to sign up for our Insomnia Masters League of Legends Tournament. Grab your BYOC tickets here, prepare your team and your PC for the start of your esports journey to Birmingham for your opportunity to claim a spot in the Forge of Champions!

Be sure to catch the Summer Arena Clash as we go into our playoffs to find out who will win the Summer League of Legends Arena Clash and their chance at the Forge of Champions glory 6pm Thursdays at Twitch.Tv/BelongArenas.

This is just the start of Belongs commitment towards building a path from grassroots to pro in the arenas.

Watch this space for more info in the future…

LVP (League of Videogames Professionals) is the biggest esports organization in the Spanish-speaking market and one of the biggest tournament organizers in the world, with offices in Madrid, Barcelona, Buenos Aires, Bogota, Mexico and London and presence in more than 30 countries.

LVP manages the most prestigious national competitions (like Superliga Orange in Spain, Liga Master Fibertel in Argentina or the UK League Championship in the United Kingdom), big international tournaments (Gamergy Masters, CR Nations Cup), online competition platforms (ArenaGG) as well as the official broadcaster in Spanish of international events such as the League of Legends European Championship (c) or the Clash Royale (c) League. 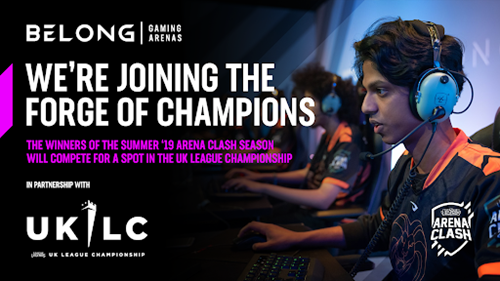