It's official. Battlefield 2042 will be gracing gamers across the globe in October later this year.

Prepare to adapt and overcome in a world transformed by disorder. Squad up and bring a cutting-edge arsenal into dynamically-changing battlegrounds supporting 128 players, unprecedented scale, and epic destruction. 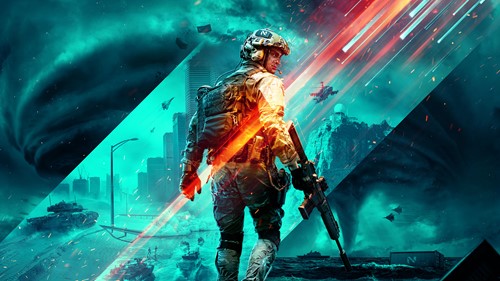 WHAT ARE WE EXCITED ABOUT?

Battlefield 2042 will be the first game in the franchise to support up to 128 players in all-out war.

With a colossal amount of players entering the field, players will have to adapt, discovering new gameplay opportunities and epic moments, where anything can happen.

Players will need to get creative with their combat through a full roster of cutting-edge weapons, vehicles, jets, helis, and all-new equipment, inspired by the not-so-far-away future of 2042.

THE RANGER - Summon a robotic dog to the field, built for battle.

Alongside an impressive arsenal, players will be able to use employ a grappling hook to reach new places, don a wingsuit, deploy a recon drone, and more.

Each battlefield has multiple distinct combat areas, within a single playspace, allowing more space for meaningful vehicle gameplay. Tanks will have more space to roam and fighter jets have more airspace to manoeuvre.

Across each of the seven maps, players will experience ever-changing battle conditions and gameplay challenges, forcing them to adapt to dynamic events and disasters such as sandstorms in the deserts of Qatar, a rocket launching from French Guiana's Space Centre, and tornadoes threatening South Korea's concrete jungles.

Players can choose their role on the battlefield and form hand-tailored squads through a brand-new Specialist system.

Based on Battlefield's four Classes, Specialists have one unique Speciality and Trait - but the rest of the loadout is fully customisable.

Build synergies within your squad and empower yourself to take on any battle situation.

Players will progress through a Season system, bringing fresh updates and new content to the game, including Specialist soldiers, locations, weapons, and vehicles.

Are you as excited as we are to see Battlefield 2042 drop in October?

You can pre-order now with GAME by clicking here!